What is worm composting?

Worm composting, or vermicomposting, is the process of using worms to break down organic material and harvesting their castings (worm poop) for use as a fertilizer. Worm castings are known as black gold for a reason: vermicompost is the best compost out there! Waaay better than sprinkling chemical fertilizer on your plants.

So how do I do worm composting? Do I just throw some worms on my compost pile?

Well, no. Vermicomposting, while similar in principle to basic composting, is very different from composting in a pile. Vermicomposting is typically done in a container, such as a storage tub with holes drilled into it. And, depending on where you live, you may need to keep your worm bin indoors – the red worms used for composting don’t do well in extreme heat or cold.

Here’s how to make a worm bin:

When you’re ready to harvest the worm castings – usually after 2-3 months – separate the worms and the unfinished materials from the castings. Worms hate sunlight so an easy way to do this is to pile up the materials in the sun and scrape the top layer of castings off every hour or so. The worms wriggle to the bottom and can easily be placed back into the worm bin.

Worm composting is a great way to compost in a small space, like an apartment. 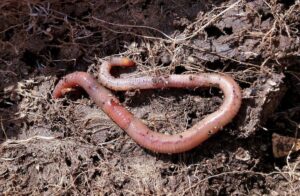